Sonnet 9: Is it for Fear to Wet a Widow's Eye 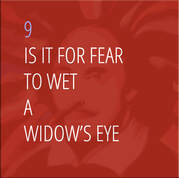 LISTEN TO SONNETCAST EPISODE 9
The multi-layered and marvellously complex Sonnet 9 sets out with an unlikely supposition to make some strongly suggestive statements about the young man and his conduct and introduces a whole new, massive, and massively important, concept to these poems.

Superficially, it can be read as yet another iteration of the principal thought that runs through all the Procreation Sonnets, that the young man, by not having any children, is wasting his beauty. The deployment of the vocabulary though is as precise as it is laden with undertones that – especially when read in the context of the other instances so far where the poet has used the same words – are quite obviously sexual. "Consumest thyself" and "murderous shame" that somebody "commits" "on himself" are the strongest contenders, but "beauty's waste" too has its potential to evoke additional shades of meaning.

It is absolutely worth reiterating though that we may be reading more into these sonnets than the writer intended. How likely though is this to be the case? I would argue not all that likely. Let us remind ourselves what these first seventeen sonnets do: they tell a young man to produce a child. We've so far learnt a few things about the young man which we will summarise again soon, but perhaps not here, since we did so recently, and this sonnet itself doesn't tell us anything new about him, but certainly the impression we are getting is of a fairly headstrong, somewhat self-obsessed, on all accounts beautiful and sexually active young man. And the only way in Shakespeare's day you can produce a child is by having sex. So if sex features in these sonnets by being alluded to, even referred to, if the poet appears to observe that the young man, in order to have a child, really has to start putting his sexual activity to a more targeted use than he seems to be doing, then none of this needs to either surprise or scandalise us. We have noted before how viscerally lives are lived in Elizabethan England, and it is also worth noting that neither Shakespeare nor his contemporaries are all that squeamish about sex. No society in which men wear codpieces can be.

And so possibly one of the most interesting things that Sonnet 9 does is remind us that we in our society – I am talking quite specifically about Britain, Western Europe and North America in the third decade of the 21st century – are probably more prudish, more moralistic, more, ironically, worked up and sensitive about the earthy, fleshy, raunchy sexiness of sex than Shakespeare, his young man, and their contemporaries were. And indeed, as we are soon to find out, about sexuality. But that has not really come into play yet, and we want to go by what the words themselves tell us in these sonnets, both case-by case and cumulatively, and so talking about sexuality and gender at this point would be jumping the gun by several blows.

But one more thing seems to occur, and this – again – may or may not be based in fact: it is but an impression. It is nevertheless an impression and if it were to turn out to be correct it would be significant enough: I, the poet, William Shakespeare, seem to be getting more daring, more bold. Whether that's because I'm getting bored with my task or whether it is that I am getting to know the young man, we don't know, but there is one critical, crucial, categorically important word that we haven't even mentioned yet, and it features here for the first time in this sequence: love. "No love toward others in that bosom sits," I say, and this is the first time in this, the traditionally accepted, originally published sequence, that we get the word 'love'. Nine sonnets in, in the penultimate line.

Is this significant? Of course it is. If nothing else, the fact alone that it has taken the poet this long to introduce the concept of 'love' is telling. So far, we've had a "lovely April" in Sonnet 3, we've had the young man addressed as an "unthrifty loveliness" in Sonnet 4, and in Sonnet 5 he became, by an intriguing poetic device, "the lovely gaze where every eye doth dwell." But nobody has mentioned 'love' before. Marriage, yes. Making children? Yes. 'Using' your beauty? Yes. 'Wasting' your beauty? Absolutely. But LOVE?...

This is the first time we hear of it, and so of course we are entitled to ask the Tina Turner question: just what exactly has love got to do with it all? For the poet? For the young man? For the young man's potential wife and mother of his still, as yet, potential children?

This sonnet does not tell us. But we stand a fair chance of finding out more as we continue our journey...
This project and its website are a work in progress.
If you spot a mistake or have any comments or suggestions, please use the contact page to get in touch. ​​