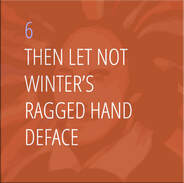 LISTEN TO SONNETCAST EPISODE 6
Sonnet 6 continues the argument set up by Sonnet 5 and so the two really have to be taken together:

​Those hours that with gentle work did frame
The lovely gaze where every eye doth dwell
Will play the tyrants to the very same
And that unfair which fairly doth excel.
For never-resting time leads summer on
To hideous winter and confounds him there,
Sap checked with frost and lusty leaves quite gone,
Beauty o'ersnowed and bareness everywhere.
Then, were not summer's distillation left,
A liquid prisoner pent in walls of glass,
Beauty's effect with beauty were bereft:
Nor it nor no remembrance what it was.
But flowers distilled, though they with winter meet
​     Leese but their show, their substance still lives sweet.

Then let not winter's ragged hand deface
In thee thy summer ere thou be distilled:
Make sweet some vial, treasure thou some place
With beauty's treasure, ere it be self-killed.
That use is not forbidden usury
Which happies those that pay the willing loan;
That's for thyself to breed another thee,
Or ten times happier be it ten for one.
Ten times thyself were happier than thou art,
If ten of thine ten times refigured thee,
Then what could death do if thou shouldst depart,
Leaving thee living in posterity?
Be not self-willed, for thou art much too fair
​       To be death's conquest and make worms thine heir.

These are the first two sonnets in the collection that come as a pair, and together they clearly continue to urge the young recipient of these sonnets to breed children. But there are two or three elements that are really quite noteworthy about them, apart from the fact that they come as a couple, which is in itself of course interesting: Shakespeare breaks the standard convention of the sonnet as a self-contained unit in which an argument is set up, explored, and concluded, and creates a bigger arc that spans over twice as many lines, giving him correspondingly much more scope for his elaboration.

While we are still to some extent in quite transactional territory – we still speak of usury, of loans, of legacy – the imagery that I, the poet, here conjure up is beginning to sound more involved, more imaginative, more poetic and more personal. There is no obvious knowable reason for this; we can not really speculate why this is the case, we can only observe it.

The analogy that I, the poet, invoke is that of a beautiful flower whose essence can be distilled and thus survive the deadly force of winter. Similarly, the young man can 'distil' himself and thus escape the ravages of death. The analogy, as happens now and then in Shakespeare, doesn't strictly work, because the distillation of a rose, for example, in a rosewater or a perfume, will only last as long as that substance is preserved, and once it's used up it is then gone, whereas a child will grow, live, and with a bit of luck produce further children and thus continue the young man's genes or essence for as long as the cycle of birth and death is unbroken.

But what makes these two sonnets particularly interesting is not their logical flaw — it is poetry after all, it works with imperfect imagery — it is really how they build and lead up the the closing couplet of Sonnet 6:

Be not self-willed, for thou art much too fair
To be death's conquest and make worms thine heir.

"Thou art much too fair." This is a change in tone. Up until now, I the poet, William Shakespeare, have spoken quite generally about "fairest creatures," and then moved on to talk about the young man's "beauty's field" — his face — and his youth's "proud livery," and beauty in fairly generic terms. In Sonnet 3, I made a very specific observation, namely that the young man is a mirror to and therefore mirror image of his mother, and this is certainly of great significance. But it is also something that I could know from hearsay or from looking at a picture of the young man and of his mother. In Sonnet 4, I called him an "unthrifty loveliness" and a "beauteous niggard," which still are terms that could, as we in fact have noted, be said about anyone of whom a few basic facts are known.

From Sonnet 5 we hear something confirmed we already had an inkling about: the young man's youth's "proud livery" was "so gazed on now" in Sonnet 2 and here in 5 we learn that "every eye doth dwell" on the "lovely gaze" of the young man: he is generally seen as beautiful.

Here now in Sonnet 6,  I, the poet, say to the young man: "thou art much too fair" – and that's a subtle but noteworthy shift in tone. It's really the first time that I express an opinion that sounds as if it is mine own. A bit of distance has evaporated: I make an observation that could quite conceivably still be taken from a picture or imagined from hearsay, but it sounds more subjective than anything we've heard before. And as with most of these early nuances that we may note: we don't know if they mean anything. We don't know if they're intentional. We simply are able to register them.

And fortuitously, we get another little nugget in the exact same line: "be not self-willed." Now, it is entirely possible that no pun whatsoever is here intended. Also, the Quarto Edition spells this "self-wild" and so if this is how Shakespeare penned it, and not just how it was typeset, it may in fact pun on something entirely different. As we know though, spelling and typesetting are so inconsistent in Shakespeare's day as to be almost random. Furthermore, when looking at literary works like these, there is always a temptation to perhaps read more into lines than is actually there, to construct a narrative that suits us as the listeners or readers but that never even crossed the writer's mind. Still, William – Will – Shakespeare is a keen and proficient deployer of puns. Not least on his name. There will be plenty occasions when without doubt he puts his name into his sonnets.

Does he do so here? We don't know. Yet it is interesting that just as we sense that there is a subjective tone entering his writing for the young man here with this emphatic "thou art much too fair," we also get something that any intelligent mind would be quick to identify as the potential self-reference of a highly, intricately, skilled wordsmith. Coincidence? Possibly. Overthinking the matter? Not so much: Shakespeare composes these sonnets extremely carefully, and multiple layers are part of his panache. A hint that something may have shifted slightly in the relationship between the poet and the recipient of the poem? Very slightly, I would say, but quite conceivably yes...
This project and its website are a work in progress.
If you spot a mistake or have any comments or suggestions, please use the contact page to get in touch. ​​