Sonnet 5: Those Hours That With Gentle Work Did Frame 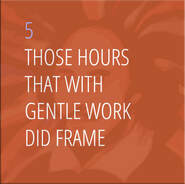 LISTEN TO SONNETCAST EPISODE 5
Sonnets 5 and 6 are the first in the series to come as a pair, and so while Sonnet 5 does make sense on its own, it really needs to be read in conjunction with Sonnet 6 for the argument to be properly made.

This, then, is the first half of a composition, and it lays out the premise, as it were. The premise is that time passes by the hour and this same phenomenon, time, that over many years has made you the beautiful human being that you are today will also ravage your beauty: as you grow older, your life turns from where it is now, in the full bloom of summer, to a cold and barren winter where your present beauty will have vanished.

In nature though, there is a remedy for this: we can distil the flowers of summer to preserve their essence. The sweet smell of the rose, for example, can be kept in rosewater, and so even though the flower itself will inescapably have to die, by allowing its petals to be distilled, it can keep something of itself alive.

What Shakespeare is building up to is of course more advice to the young man on what he should do, and it will come as no surprise that this is to effectively 'distil' his essence, by making a child.

Sonnet 5 on its own then does not tell us anything new, either about the Fair Youth or about Shakespeare, but it does tell us something very interesting about the time we find ourselves in: the seasons in Shakespeare's England are of fundamental, existential importance. Not only are people much more connected to nature generally and therefore no doubt also much more in tune with the weather and the seasons, but in an era before electricity, before central heating, and before modern clothing and construction materials, winters were long and cold and dark. Fuel and candles were expensive and even in a moderate climate like that of southern England and the Midlands, temperatures could be fierce. So for most people winter was really quite 'hideous', most of the time.

​The beauty of a summer's day will find its expression and a great deal of meaning in one of Shakespeare's most famous sonnets soon, but first of all we will next find out how Shakespeare deploys his metaphor of the distilled perfume on the unsuspecting young man in Sonnet No 6.
This project and its website are a work in progress.
If you spot a mistake or have any comments or suggestions, please use the contact page to get in touch. ​​