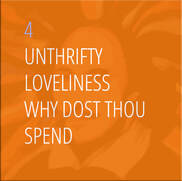 LISTEN TO SONNETCAST EPISODE 4
The argument of Sonnet 4 is much the same as that of the first three sonnets: the poet, William Shakespeare, tells the young man – about whom we still don't know very much – that he needs to produce an heir. The analogy the poet uses is perhaps not the most poetic one, and compared to the "forty winters" that "besiege thy brow" and the "deep trenches in thy beauty's field" of Sonnet 2, the legalese of Sonnet 4 may strike us almost a tad pedestrian.

The sonnet's principal tenet is that your beauty is not so much a gift of nature, as it is a loan. And being 'given' — as in 'lent' — so generously by nature, you, the young man, should share this beauty with commensurate generosity with the world by passing it on to future generations. Being mean and selfish with your beauty puts you on a hiding to nothing, because this way, when your day of reckoning comes as you die, you will leave nothing behind that amounts to anything, whereas if you use your beauty to the end of passing it on, you will leave behind a proper legacy.

The sonnet then does not really tell us anything new, nor does it tell the young man whom it is addressed to anything he doesn't already know. And while poetry may be a matter of taste, few people would argue that this is an especially evocative, lyrical or, for want of a better word, 'beautiful' poem.

Which automatically begs the question: if that's the case, why write it? Why is Shakespeare writing a slightly convoluted and certainly fairly dry argument to make a point he has already made three times in more imaginative language and that is really easy to get? And while we don't know the answer to this question, the fact alone that the question seems to be justified opens up a view on an as yet unsubstantiated but plausible possibility: it is far too early to make a call on this, but in the context of the previous three sonnets it does rather seem like Shakespeare simply had to write this poem because somebody asked him to. We don't know if this is the case and we certainly don't know who, if anybody, asked Shakespeare to write this and the other poems in this part of the collection, and what put them into a position to do so. All we do know is that the poet – far from deploying writerly fireworks – is here carefully constructing a fairly abstract and yet still not entirely convincing case in the language of financial and legal affairs to support an argument he has already won with much simpler and more compelling imagery.

This though in itself does not need to entirely surprise us: marriage was very much a legal and financial affair; the vast majority of marriages in Shakespeare's day were entered into not for love or as romantic adventures, but for the sake of an arrangement that benefited both parties, with the parties being the families and estates on either side of the deal, much more than the individuals principally involved in the marriage themselves.

And here perhaps lies the real interest of this Sonnet No 4: not so much in its linguistic dexterity or in the imagery it conjures up – other sonnets in the collection are much more powerful in that regard – but in the atmosphere it conveys of what all this is really about: a transaction. And in this it may well also echo the cause for its own existence: a transaction. It is entirely possible, though entirely unproven, that this sonnet, along with some, all, or most of the first seventeen that make up the Procreation Sequence, was commissioned from the poet purely for the purpose that is so obvious: a young man needs to get on with it and produce an heir.

And when we speak of transactions here, we may include in these those that are of a sexual nature too. Shakespeare comes extremely close to telling the young man in these first few sonnets that he should stop abusing himself and impregnate a woman instead. It sounds crude to put it in these terms, but that is effectively what he does, and Shakespeare elsewhere in his works does not shy away from being bawdy. This, too, need not surprise us: the world William Shakespeare and the young man live in is a visceral, fast-living, immediate one. People live in close connection to the cycles of life; having children is part of a survival strategy for most, and making them is part of nature. There is very little privacy. If you are poor you live in crowded shared accommodation, if you are rich you are almost by definition a public figure.

We have had an inkling, in Sonnet 2, that the young man is well to do, that he is a man of importance and thus "gazed on." We learnt from Sonnet 3 that he bears a striking resemblance to his mother, striking enough at any rate for the poet to point it out in preference to painting a picture of a young man who takes after his father; and we can accept it as an established given that in order for the young man's procreation to be of such great significance as is suggested in these poems, he not only has to be a person of some status and therefore significance himself, but also that the continuation of his line and therefore name really depends largely, so as not to say entirely – although very likely that too – on him, which would make him a firstborn or only son.

And while we don't know very much at all about the relationship, such as it is, between the young man and the poet yet, we get a sense from the tone of Sonnet 4 that we are in something of a transactional setting; an impression that is somewhat supported by the absence of any real emotion or personal investment in these first few poems: I the poet, William Shakespeare, do call the young man a number of paradoxical things, such as a "beauteous niggard," or an "unthrifty loveliness," but these are fairly generic terms that any poet could write about any person of whom one or two basic things are known, in this instance namely that they are beautiful and that they are not purposeful enough in the pursuit of the perpetuation of their lineage.

In other words, apart from the few things we now know about Shakespeare and the young man from just these sonnets, we also know that there are quite a few things we actually genuinely don't know. And this, though it may not at first glance seem so, is itself tremendously exciting and very useful indeed, because once you know what you don't know, you may know what to look for in the things you do know...
This project and its website are a work in progress.
​If you spot a mistake or have any comments or suggestions, please use the contact page to get in touch. ​​