Sonnet 2: When Forty Winters Shall Besiege Thy Brow 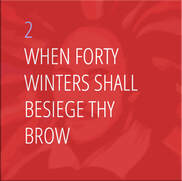 LISTEN TO SONNETCAST EPISODE 2
Sonnet 2 continues the poet's mission to convince the young man of the need to produce an heir. And from today's perspective two things are particularly noteworthy.

First, the perception of old age: Shakespeare paints a picture of the young man at the age of forty – "when forty winters shall besiege thy brow" – as basically old. His "beauty's field" – his face – will be beset with deep trenches and the proud apparel of his youth will have turned into a tattered weed. Most of us today would smile at this, but life expectancy in Elizabethan England for a young male in London was approximately 30 years. If you got to forty, or, like Shakespeare himself, to 52, you did well (and Shakespeare himself spent the last few years of his life in the parochial peace of his native Stratford-upon-Avon).

Of course, people had the capacity to grow much older, and 'threescore years and ten' — 3 times 20 plus 10 being 70 — was considered a normal human lifespan. But with the plague, any number of other diseases, no science or modern medicine to speak of to cure injuries or illnesses, and extremely violent politics and near-constant warfare, your chances of actually making it there were slim.

This context is important in several ways. Firstly, the urgency with which the young man is being told to get on with it and produce an heir: he doesn't have forever; secondly, how the relationship between Shakespeare and the young man evolves. We will see that he considers himself to be much older and in the autumn if not indeed winter of his life at a time when he could not have been more than somewhere between his own early thirties and early forties, whereas the young man is considered and expressly described as being in the full springtime bloom of his youth, but in order to effectively start a family now he would have to be at least around 18 to 20.

The second thing worthy of note is that here we hear the child referred to for the first time as male. This is of unequivocal importance in Elizabethan England. Queen Elizabeth I's father, Henry VIII, famously went to extraordinary lengths to obtain a male heir. His six wives, whose fate the mnemonic catchily describes as 'divorced, beheaded, died; divorced, beheaded, survived' were entirely a consequence of this quest to produce a male heir, as indeed was the English Reformation which he instigated when he couldn't get his first marriage annulled by the Pope.

So who or whatever prompts Shakespeare to write these sonnets must have strong reason to do so and care greatly about the young man's succession, which suggests that the young man is either a first-born son or an only child. If he were the younger of several brothers, it would be nowhere near as important for him to procreate, and we will shortly get more and very intriguing evidence of this.

​The young man is also, this much we learn from this sonnet, "so gazed on now:" And while it is entirely conceivable that somebody of little or no social status has their admirers, this is an early pointer towards somebody who is known to the world, who has the attention of the people around him, and who is generally viewed as beautiful. As we proceed and listen to these sonnets, we will be able to imagine much more clearly what kind of a person this young man is...​
This project and its website are a work in progress.
​If you spot a mistake or have any comments or suggestions, please use the contact page to get in touch. ​​